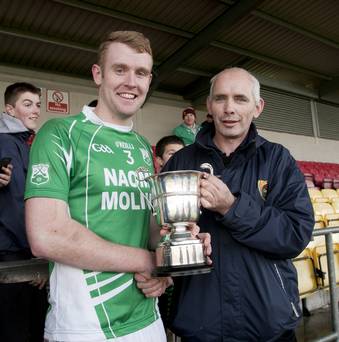 Although our Inter-County season was cut disappointingly short, the early part of the year shone brightly as our very own Mount Leinster Rangers blazed a comet’s trail through the 2013 Leinster Club scene and amazingly all the way to Croke Park on St. Patrick’s Day. The boys from Borris, Ballymurphy, Rathanna and every nook and cranny in between, shook up the hierarchy in our own province as they dispatched not only the South Dublin ‘superclub’ Ballyboden St. Enda’s but in a never to be forgotten day in late 2013 they put Oulart the Ballagh to the sword on their way to the All-Ireland Club Final last March. While eventually coming up short it was yet again a timely reminder that Carlow players have as much individual talent as any out there.

The Club Championships took centre stage as the evenings started to stretch and the smell of cut grass filled the air. The new 8 team Senior Football Champ. showed early promise as the matches tightened up and teams realised the days of easy pickings were a thing of the past. That said, however, the eventual winners Rathvilly could afford two early defeats and yet emerge top of the pile, deservedly so on County Final day though it must be said. High hopes turned to despair as local rivals Rathnew accounted for our lads at the first hurdle.

St. Mullin’s overcame a dreadful deluge on hurling’s biggest day as they climbed to the summit once again with a victory over a typically determined Myshall outfit. As Rangers’ exertions over the past 18 months eventually caught up with them, the field opened up and the chasing pack closed with every summer’s puck. Unfortunately, and not allowing for a huge travelling support, the men from Naomh Moling were downed by Westmeath champions Raharney in the Leinster Club first round.

In the Intermediate and Junior Football grades respectively both Ballinabranna and Ballon did Carlow proud as they progressed vey well in Leinster before bowing out. MLR clinched the Intermediate and Minor Championships to suggest that they are only reloading before another assault in 2015 while St. Mullin’s rounded off their centenary year in style as they added the U21 crown to the trophy cabinet. Other highlights of a very competitive football season saw Éire Óg win an U.21 and  Tinryland clinch a Minor Football title for the first time in their history after which the outpouring of emotion was a sight to behold for all lovers of Gaelic Games.

But the best news of all is that 2015 is just around the corner and in no time at all we’ll be on the campaign trail again as our respective Clubs, not to mention our proud County, will get the ball, (big or small), rolling again……………………