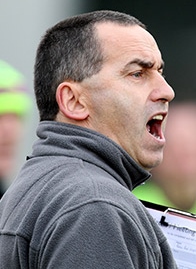 Hopes that the fortunes of Carlow football could be set to take a turn for the better received a huge boost in the O’Byrne Cup first round tie in Dr. Cullen Park on Sunday.

In a closely fought contest, Carlow led early on with two points from Paul Broderick but UCD fought back to lead 0-8 to 0-5 at the interval.

The Carlow scores came from Broderick, Ciaran Moran and Derek Hayden in the opening period. It was the home side who did all the early pressing in the second half and with twelve minutes left, Hugh Gahan found the net from close range to level the game at 1-9 to 0-12.

The students reacted well to score five unanswered points to all but clinch victory. Not to be outdone, Carlow fought to the end and with big performances from Sean Gannon, Shane Redmond, Declan Kelly and Kieran Nolan it was the visitors who were relieved to hear the full-time whistle.