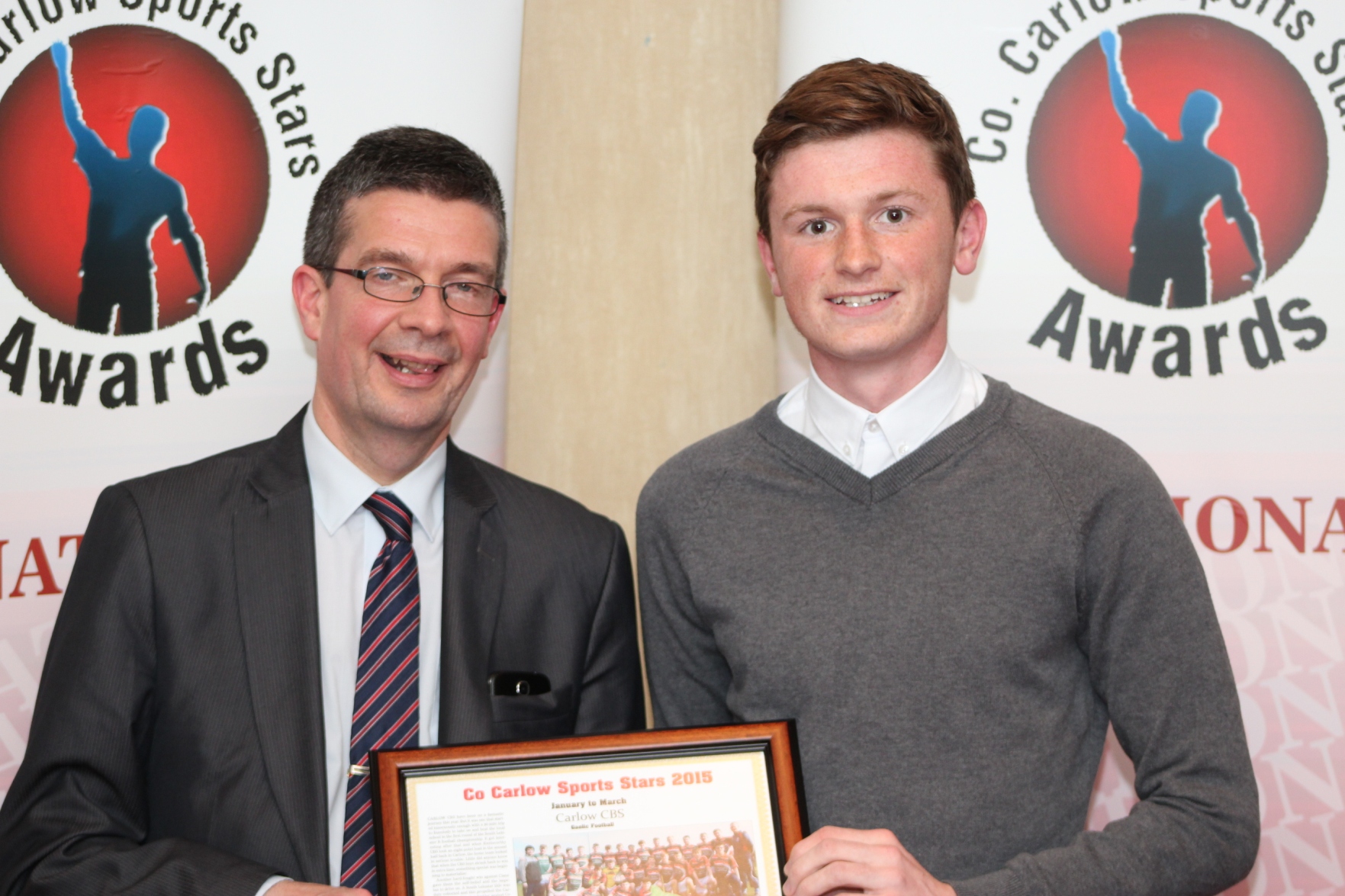 Last Friday night the County Carlow Sports Stars Awards for January to March  took place in the Seven Oaks. The Nationalist initiative rewards sports personalities and teams for achievements and performances over a three month period. Carlow Senior Footballer Sean Gannon, Coláiste Eoin Hacketstown and CBS Carlow were all awarded on the night for their respective achievements on the field of play.

The Éire Óg man was talismanic throughout Carlow’s league campaign and was a deserved winner of the award. A Midas like outing against Waterford in the harsh conditions of Dungarvan was perhaps the high point where Gannon scored three influential points allowing Carlow to come from behind and win. On more than one occasion this season Gannon has scored directly from the throw-in with a point after thirteen seconds against Longford and fifteen seconds into the second half against Offaly. He has been consistent in the Carlow midfield and has got the better of his fair share of midfield partnerships securing the ball with soaring leaps. Coláiste Eoin received their award for their great run through the Leinster Post Primary Schools Juvenile “D” Football Championship. An attacking approach to the game saw them produce an exciting brand of football, culminating in a 6-12 to 2-7 Leinster Final victory over Moyle Park. The attacking style of  the Hacketstown men saw them score five first half goals to push them well clear. Although CBS Carlow’s All Ireland win happened outside of the January to March window, their County Carlow Sports Stars Award is of course a recognition of their performances from the start of the year that brought them to an All Ireland Final.  Their remarkable journey started with a first round win over FCJ Bunclody followed by a rising from the ashes against Enniscorthy to win after extra time. South Leinster and Leinster Final wins would follow for the CBS Carlow men .Throughout the CBS Carlow’s run they played an attacking brand of football which made their victories all the more enjoyable to watch. Their efforts were rewarded with an All Ireland Final win in Croke Park. With the match being televised live on TG4 it meant that the spotlight shone brightly on Carlow GAA and CBS Carlow  blossomed in that light. Pictured is Captain Niall Lowry receiving the award on behalf of the team.