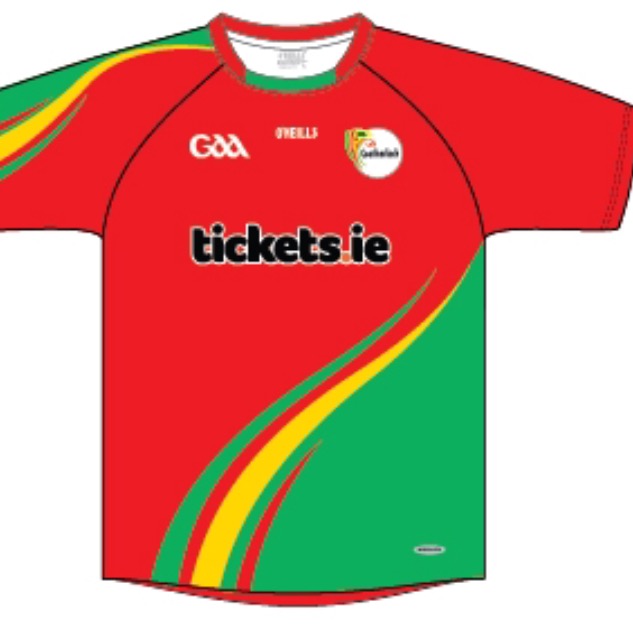 This sponsorship deal will see the Tickets.ie logo displayed on the front of the jerseys worn by all Carlow teams, from the Talent Academy age groups up to the Senior ranks. Both Carlow GAA and Tickets.ie were delighted to officially announce this deal today at Netwatch Cullen Park and proudly unveiled the newly designed jersey.

County Chairman Michael Meaney spoke enthusiastically about the sponsorship deal: “To have a company like Tickets.ie see the potential in Carlow GAA and wish to get involved with us is very exciting. There are plenty of opportunities for both brands to develop and grow together over the course of this arrangement and Tickets.ie are a company whose high ambitions and achievements match the aspirations we in Carlow GAA have for our County.”

Speaking at the announcement John O’Neill, Managing Director of Tickets.ie, said: “As the largest sports ticketing provider in Ireland we are delighted to support Carlow GAA. Tickets.ie firmly believes in supporting local teams, local events and local communities on a national level. We are very excited to embark on this journey with Carlow GAA and wish them the very best of success for 2015. Go Carlow!”

The new sponsor will see its first public appearance on the new Carlow jersey this Sunday as the footballers take on Antrim in Belfast and with such confidence displayed by sponsors it will surely be a season of success for all involved.

Based in Dublin, but with over 360 retail outlets nationwide, Tickets.ie fosters a vision that cultivates a local focus with a national reach.

Tickets.ie prides itself on providing cutting edge technology for ticketing solutions and is a leader in technology and innovation.

Tickets.ie is recognised by Deloitte as Ireland’s 4th fastest growing technology company (2014) and is also a The Irish Times / InterTradeIreland Innovation Awards finalist (2013).