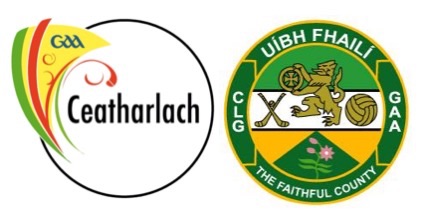 Allianz Division 4 Football Round 5
Carlow v Offaly
O’Connor Park, Tullamore
Sunday 15th March
2.00pm
Referee: Damien Maher (Westmeath)
Carlow will look to take a huge scalp on Sunday when they face an in form Offaly side who like Carlow, are still unbeaten in the league. Both teams suffered frustrating draws last Sunday however and Offaly had to rely on Willie Mulhall to score a late free to level the game whereas Carlow could just about stand and watch as Dean Odlum floated a ball to the left and wide for Wicklow to give Carlow a draw.
A win for Carlow would be huge as it would see them leapfrog Offaly with only Leitrim and Longford left to play. Although historically speaking Carlow victories over Offaly are rare Carlow go into this game with a new sense of confidence with hard fought victories over Longford and Waterford.
Carlow will have to contend with Willie Mulhall who has scored 3-13 so far in this year’s league. Offaly will be out to prove that their draw against Leitrim was an exception and not the rule as Bernard Allen and Niall McNamee will be looking to rekindle their form in earlier matches.
Wicklow play Longford and Waterford play Antrim in the other matches in Division 4.

There is no doubt that Turlough’s men have the capability to turn over this Offaly outfit with players like Kieran Nolan, Shane Redmond and Sean Gannon having standout seasons so far but it will take a huge concerted effort from all involved to smash and grab these two points. Carlow people are starting to believe……maybe Carlow is rising……now we’ve got to prove it.