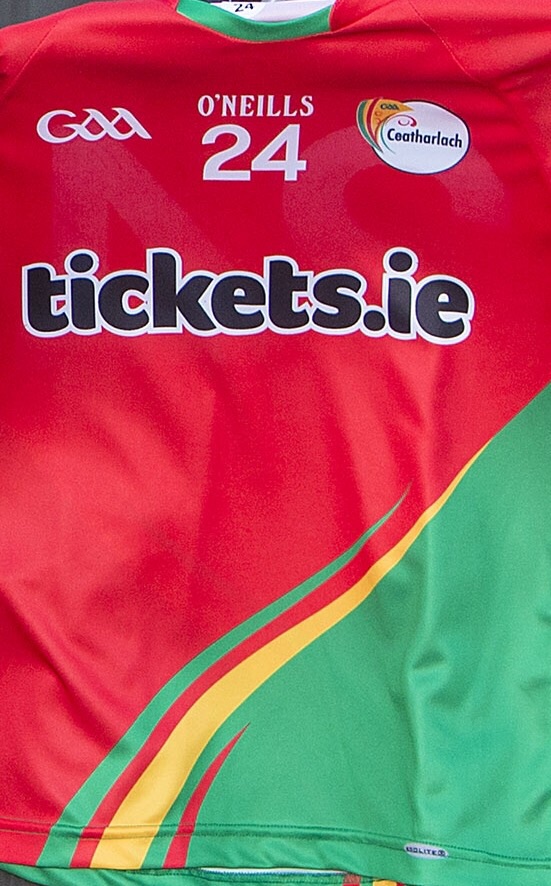 On a bitterly cold day in West Belfast Turlough O’Brien’s reign as Carlow Manager began in earnest and ended up in a somewhat satisfactory manner.

The draw may have flattered the hosts as in truth Carlow were the better balanced team over the 70 mins. That is not to say that the Scallion Eaters played without fault and unfortunately will rue the concession of the ball to the Saffrons who punished Carlow on the counter attack far too many times than the Manager would have wished for. The welcome return of Brendan Murphy to the fold yielded plenty of possession for our lads who were sporting their new jerseys in the tight environs of St. Paul’s GAC.

Paul Broderick was tearing the Antrim defence to pieces in our two man full forward line while Sean Gannon was a constant driving force i lár na páirce. Kieran Nolan’s surges up the field spurred his team on throughout and was unfortunate that the flowing move he began leading to a great team goal ultimately ended in square ball controversy and the home side escaped.

Antrim emerged for the second half a more determined outfit and a goaled after another Carlow move broke down. Indeed our lads showed great resilience to battle back as Antrim began to stretch their lead. With the sides level deep into injury time both Paul Broderick and then Darragh Foley had chances from frees to win the game but just couldn’t convert and our Ulster hosts clung on for a share of the spoils.

The sizeable Carlow travelling contingent, vocal throughout, made the journey home with mixed feelings; happy to have earned the point from a very difficult fixture but also a little frustrated in not having grabbed the win the team deserved. High hopes turn to next weekend’s clash with London as the players will look to build on this result. A good day’s work all told.