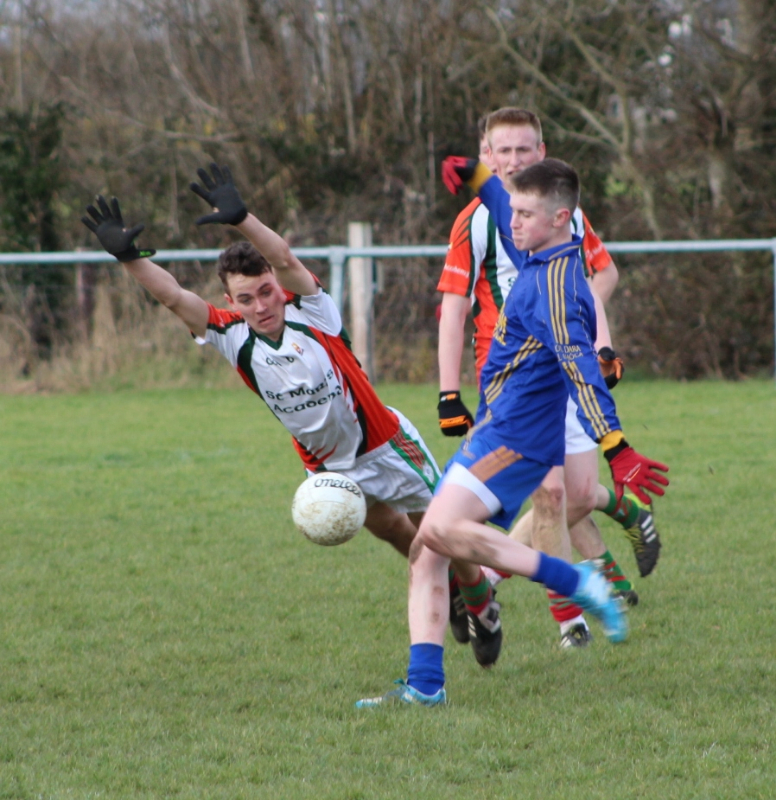 CBS Carlow have bridged a 32 year gap to bring a Leinster Senior Football title back to Railway Road. Nobody knows the frustration with the lack of silverware more  than Kerry native Maurice Browne the CBS Carlow mentor who is now heading for his fifteenth year in the Carlow school. Post match he championed the work ethic of his players saying “It was the best performance we gave all year” but he does not see this as the end of the road with the next stage of the competition still to come. CBS Carlow will now  face the North Leinster Champions of Gallen CS, Ferbane or Carolan College, Nobber.

After the two hard fought victories over Clane and CBS Enniscorthy, CBS Carlow were ready for another dog fight. Scoil Dara, Kilcock had beaten Carnew in impressive fashion and this final looked like an even match.  Forty seconds in, CBS Carlow were in on goal. The ball came to James Brennan with what looked like an open goal in front of him but a vital intervention from the Kilcock goalkeeper, Ethan Devine did just enough to keep CBS Carlow scoreless.

Shane O’Neill would add another free and Ross Dunphy would get a well deserved score from play to bring the half time score to CBS Carlow 1-7 Scoil Dara Kilcock 0-1. CBS Carlow had been on the wrong end of a seemingly massive deficit at half time against Enniscorthy so they knew that the levels of commitment couldn’t wane.

Seconds into the second half referee Darren Bracken (Laois) blew his whistle to give CBS Carlow a free, Kilcock had taken too many steps. The CBS Carlow men had continued where they left and forced the opposition into fouling the ball. Adam Deering got his second point of the day shortly after. Kilcock won the ball and began to advance and once again they were met with so much pressure from the CBS Carlow men that they had to revert to shooting from great distances.

On the thirty fourth minute a Kilcock man jumped for the ball, it went through his legs and there was Conor McGrath. McGrath advanced with it and then sent in a long pass for Colm Hulton . Hulton fielded it well, injected pace, drove towards goal and blazed it to the back of the net. Within seconds Hulton had it again, this time he elected to send it over the bar. Hulton was by no means done. Once again he won the ball, on this occasion he side stepped his man and unleashed another powerful shot that gave the goalkeeper no hope. Ninety seconds had elapsed and Hulton had scored 2-1. CBS Carlow led by a colossal 17 points.

Ross Dunphy added another point while Kilcock had to live off scraps. Shortly after Dunphy’s point, Kilcock were inside the CBS Carlow half. The Kilcock man was quickly surrounded and all he could do was fist it up in the air and once again Trevor Collins was there to scoop up the ball. Brian Byrne got a deserved score, so too did Dylan Salter. Colm Hulton added another point with fifteen minutes remaining, then CBS Carlow went their longest without a score as Kilcock went all out.

Kilcock won a free about forty metres from goal, they took it quick and Trevor Collins was outnumbered in front of goal by two to one. The ball sailed over the Kilcock men and Collins calmly caught it. Finally Kilcock would add their second point of the day, forty minutes after their first. David McLoughlin with the score. Eamonn McDonnell added one and McLoughlin added another. It was three points in four minutes but this didn’t deter CBS Carlow. Niall Lowry got another impressive block in, moments later Brian Byrne performed a block of his own.  Substitutes Adam Murphy and Jack O’Neill posted the final points of the day, giving CBS Carlow the most emphatic of victories, CBS Carlow 3-15, Scoil Dara, Kilcock 0-4. The final whistle was one of relief for Kilcock and one of sheer joy for CBS Carlow.