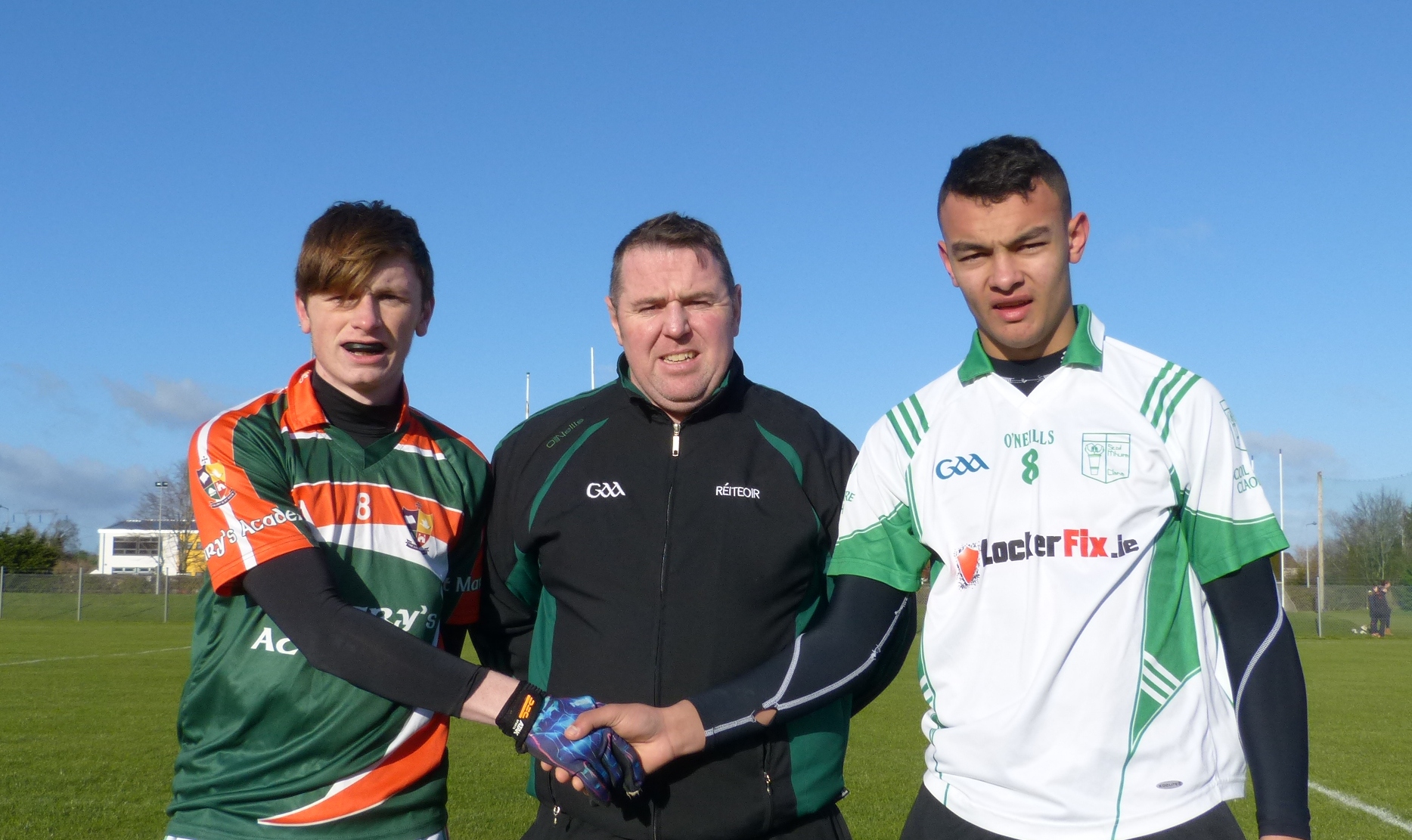 CBS Carlow looked to be heading for their second bout of extra time in eight days but as the ball came to Brian Byrne,  time seemed to stand still as  he curled the ball  in over the bar to give CBS Carlow a one point lead well into stoppage time.

The gusting wind meant that the first half was a drab affair. CBS Carlow had the wind to their back but the diagonal direction meant that it was no real advantage. The temperature gauge read 4 degrees Celsius but the wind chill made it feel considerably colder.  CBS Carlow managed to chalk up seven wides in the first half compared to Scoil Mhuire Clane’s five.

It took fifteen minutes for either side to score. Colm Hulton opened the scoring then Niall Lowry and Shane O’Neill added points to put CBS Carlow 3 points up.  Brian Byrne would put daylight between the two sides as half time approached. With one of the final acts of the first half Ciaran Kelly opened the scoring for Scoil Mhuire Clane. CBS Carlow were dealing with the pacey Scoil Mhuire Clane forwards and they would have been deserving of holding the Kildare men scoreless going in at the break.

Scoil Mhuire Clane nearly got the perfect start to the second half but they had to make do with a point after the ball was cleared off the line. Ciaran Kelly would add another two points for Scoil Mhuire Clane to bring the sides level after only five minutes of the second half. Colm Hulton would convert a free that would be CBS Carlow’s only score for the next  15 minutes.

Niall Lowry continued his battling heroics from last week’s quarter final in midfield along with Shane O’Neill as they worked doggedly to win and retrieve balls. Colm Hulton converted a free with less than five minutes to go, he’d have to wait until the clock was at sixty to grab the equaliser. CBS Carlow looked like they might be just lucky enough to hang on and get to extra time.

Andrew Watson the Scoil Mhuire Clane goalkeeper kicked the ball out. CBS Carlow’s Ross Dunphy leapt in to the air and with the momentum from a Scoil Mhuire Clane player’s knee he was able to catch it, drive forward and deliver the ball to Brian Byrne. The clock said 61, the temperature said 4 degrees Celsius and the wind blew in the opposite direction, but the young Laois minor had ice in his veins as he confidently stroked it over the bar. The cheers went up from the sideline and the travelling support but  still the final whistle didn’t sound !

Andrew Watson quickly took the kickout and found a man in a Scoil Mhurie Clane jersey this time. They worked the ball down the field and just as a levelling score seemed imminent,  a swarm of CBS Carlow jerseys put the right amount of pressure on, dislodged the ball and Shane O’Neill retrieved it on his knees and dispatched it to  the wing just as referee Darren Bracken blew the full time whistle. Full time was met with scenes of wild celebrations as the show rolls on for CBS Carlow all the way into a Leinster final.