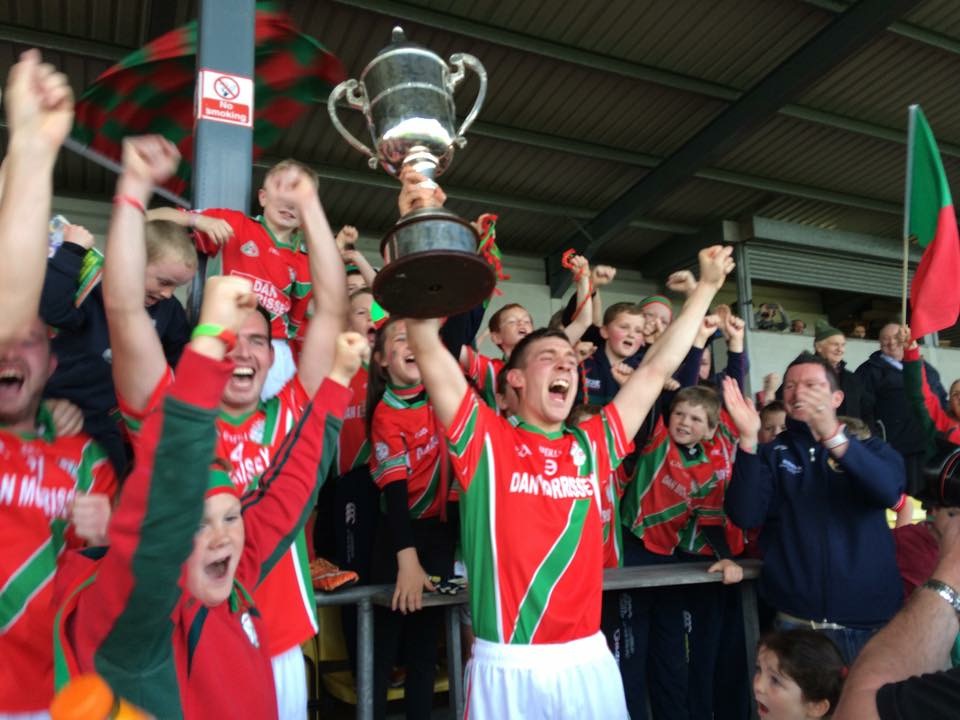 Palatine sealed their fifth county title in impressive fashion in front of a very vocal crowd. They were never behind in this game and never looked like losing.

It was a momentous result; Since Palatine’s last win in 2006 Old Leighlin went on to win three titles, with both teams tied on four titles each prior to the game, Palatine’s win edges them ahead of Old Leighlin on the Roll of Honour.

It was a momentous performance; 2-14 was the highest score in a county final in recent years and Palatine played with an attacking flair all year. Hoisting the Conlon Cup was a just reward.

From the early going Old Leighlin were unrecognisable from their usual selves as Palatine were operating a blistering pace. Ciaran Moran was in on goal on three minutes and elected to fist the ball over the bar. Palatine’s Lee Gordon fouled deep in the Old Leighlin half and received a yellow card for the challenge. An uncharacteristic Old Leighlin took the free short and back towards James Clarke in the Old Leighlin goal, Lee Gordon capitalised and drew the foul when he won possession. Gordon converted the free and Palatine were looking unflappable.

Seamus Kinsella got Old Leighlin up and running on nine minutes before Paul Reid got Palatine’s third point on twelve minutes. Old Leighlin began to get more of the ball and when Hugh Gahan won the ball and went on one of his driving runs a goal looked inevitable. Palatine dealt with the danger and Old Leighlin recycled the ball away from goal and Declan Kelly finally got a shot away to get Old Leighlin’s second point.

Palatine maintained the pressure on the Old Leighlin defence and on fourteen minutes  a blitz on the goal saw the ball hit the back of the net. After referee Brian Deering checked with his umpires the green flag was raised and it looked like Lee Gordon was the one who got the vital touch.

It was all one way traffic and on the next play Ciaran Moran was in on goal again, once more he decided to fist it over the bar to give Palatine a five point lead. An Aidan Murphy block deep inside the Palatine half was enough to keep the momentum on their side. Jason Kane got what was probably the score of the game on eighteen minutes. A sublime effort off the outside of his boot the ball sailed between the uprights and the Palatine supporters took to their feet in appreciation.

Pat Hickey responded with a point for Old Leighlin as the game entered the final ten minutes of the first half. It was their best period of the game. David Bambrick and Hugh Gahan added scores to reduce the deficit to three. Willie Minchin grabbed a goal that levelled the game despite the Palatine dominance. As the game entered stoppage time Paul and David Reid added a point each to give Palatine a two point lead at the break. It was Palatine 1-7 Old Leighlin 1-5 at half time

Palatine did not have the best of starts to the second half when Stephen Reilly received a black card in the early going. Seamus Kinsella brought Old Leighlin back to one with a free on four minutes.

A Palatine win look destined when Mark Rennick stuck in a vital block to prevent Old Leighlin taking a shot on goal. From the resulting clearance Mark Rennick brought the ball into the Old Leighlin half, passed to Jamie Kenny who passed the ball across the Old Leighlin goal; Ciaran Moran was on hand to palm it into the back of the net and give them a firm grip on the match and one hand on the Conlon Cup.

Jamie Kenny added a free shortly after to stretch the Palatine lead to four with twenty minutes left. Old Leighlin weren’t going down without a fight and a long range delivery saw two Palatine men go to Willie Minchin who palmed the ball clear to Hugh Gahan who rattled the back of Craig Kearney’s net. Willie Minchin brought the deficit back to one with a score before Palatine began to operate at a higher gear once more.

John Reid and Ciaran Moran grabbed scores in quick succession before they received a huge scare when a Old Leighlin shot made its way passed Craig Kearney. Conor Lawlor was on hand to stop Old Leighlin levelling the game. 37 year old Brian Kelly was introduced on forty two minutes and he had to wait until there was just three minutes left to get his score. He added another with one minute left to surge Palatine clear at a crucial time.

Despite the scares Palatine survived and captain Jason Kane lofted the Conlon Cup high in the air. Next up for Palatine is the visit of Emo or Portlaoise to Netwatch Cullen Park on October 25th .