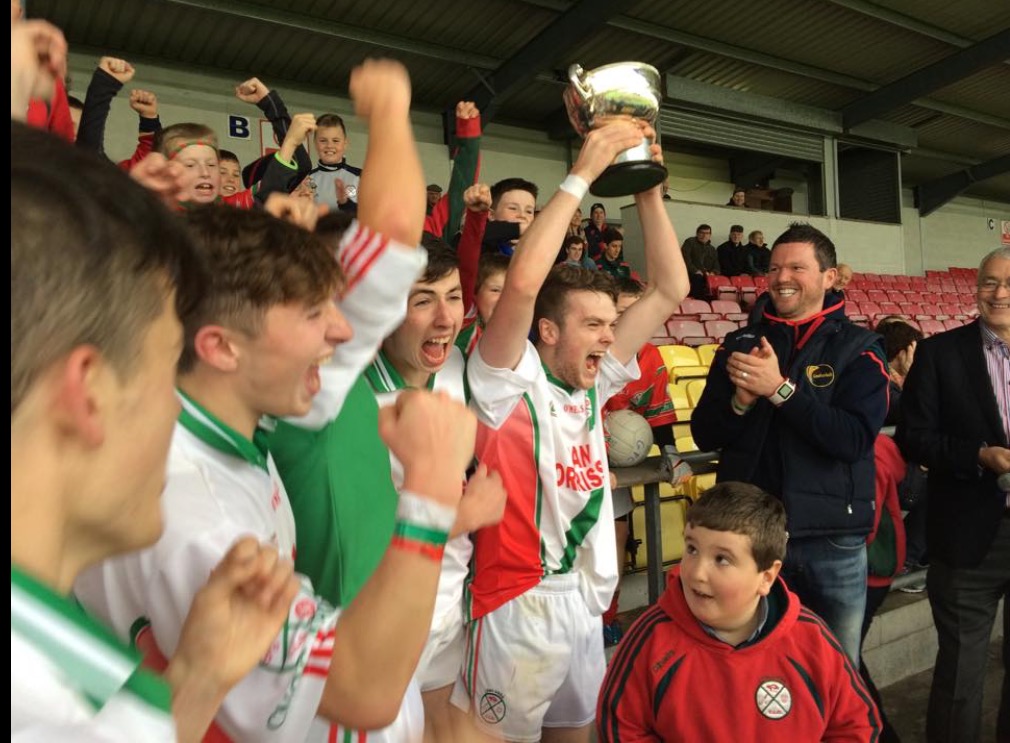 Palatine completed the Senior and Minor football double for 2015 with an impressive performance. It was the first time a team did such a double since Éire Óg claimed both titles in 2012. It is Palatine’s third title and the mood is certainly buoyant in the club after a successful year.

Palatine probably felt frustrated that Éire Óg had managed to send the drawn game to a replay last week but bar an early first half purple patch from Éire Óg, Palatine looked like they would be eventual champions.

Conor Crowley had Palatine up and running after just a minute when he converted a free. Éire Óg looked sharp in the early going and points from Ross Dunphy and Jordan Morrissey caused some concern for the Palatine men. They responded extremely well and Gavin Healy fresh from a man of the match performance the last day got his first score of the day on four minutes to level the sides. Conor Reynolds and Shane O’Neill quickly added scores to give Palatine a two point lead inside after an action packed five minutes.

The next five minutes were barren of scores which made the next score all the more remarkable. Éire Óg’s Evan Dudley sent a long range pass in to Ross Dunphy and the ball hung up in the sky long enough for Dunphy to judge its path and catch the ball from a Palatine man’s hands. Dunphy blasted the ball to the back of the net to give Éire Óg a sudden one point lead with eleven minutes gone.

Palatine were not getting a lot of ball and struggled to hold onto possession. Conor Reynolds was dispossessed as he headed for goal. James Brennan got Éire Óg’s first score in seven minutes when he converted a free. From the resulting Palatine kick out, Jordan Morrissey soared into the air and caught the ball. Ross Dunphy was on the receiving end of the pass from Morrissey and Dunphy put it over the bar.

Shane O’Neill got Palatine’s first score in fifteen minutes when he converted a free. A poor clearance from Éire Óg on the next play nestled into Conor Crowley’s chest and he duly popped the ball over the bar to reduce the deficit to one point with nine minutes remaining in the first half.

A Conor Reynolds shot hit the joint of the crossbar and the post and ricocheted out to Gavin Healy who levelled the game. Éire Óg would not lead again in the game. Healy’s work was not done and he controlled the ball on the ground and made his past the Éire Óg defence and applied the finishing touch as it sailed into the back of the net to give Palatine a three point lead. They continued to lead at half time 1-7 to 1-4.

Palatine did not seem to lose any focus over the break and Conor Crowley converted a free and seconds later a point from play within the first minute of the half. Brian O’Mahony stepped up and notably converted a 45. Showing no signs of slowing down at all Shane O’Neill converted a free and Gavin Healy got another point to edge Palatine eight points clear with just seven gone in the second half.

Points from Jody Murphy and Ross Dunphy as a result of taking free kicks short offered some signs of life from Éire Óg but Niall Cawley put a nail in the coffin when he finished a fine team move to the back of the net. Gavin Healy added a point shortly after Cawley’s goal to put Palatine ten clear with sixteen minutes left. Shane O’Neill’s free made it an eleven point lead .

Reece Denieffe scored a penalty to give Éire Óg some hope but they needed something extraordinary to bridge the staggering gap. It never came and Brian O’ Mahony grabbed two scores to eat into any inroads Denieffe’s penalty made.

Points from Denieffe and Dunphy late on moved Éire Óg closer but in the end Palatine were not in any danger in the closing moments. The last time Palatine won the minor title they won back to back trophies, with the likes of Gavin Healy around for another two years at this grade the Palatine men might have a lot more to look forward to.