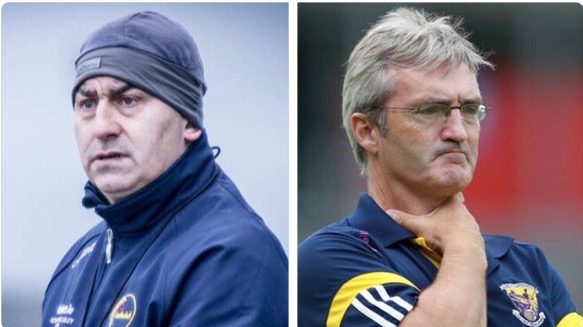 Both Turlough O’Brien and Colm Bonnar were ratified as Senior Managers for our respective codes at a County Board meeting last night.

For local man Turlough, he steps into year 3 of his reign and our qualifier performances this summer have given all involved a renewed sense of optimism and should steel the camp for a serious assault on Div. 4 of the Allianz National League. Tommy Wogan, Benji O’Brien have been announced as selectors with the possibility of further additions later and Damien Sheehan returning to the fold also.

In what has been hailed as a coup for Carlow GAA, Colm Bonnar from Tipperary was unveiled as Senior Hurling Manager taking over from Ballinkillen man Pat English. Bonnar brings an impressive CV to the table and Chairman Sen Campion last night called on both Clubs and players alike to do everything possible to support the new man at the helm.

An All-Ireland medal winner himself, and a strong coaching pedigree to boot, Bonnar could be the catalyst for our hurling panel to realise their obvious potential. A positive NHL showing would tee us up nicely for the Christy Ring. Bonnar will use the next month or so to assess the players at his disposal and will be ably assisted by his selectors John McDonald & Adrian Corcoran. Martin Byrne will perform the coaching duties. A lot will now hinge on the players’ response and serious commitment will be demanded for the season ahead.

U.21 Football Manger Peter McConnon and Minor Football Manager Ken Hickey were also returned unopposed. Both U.21 & Minor Hurling management teams will be announced in due course. Carlow GAA also wishes to thank Pat English for his utter commitment and dedication to the Carlow cause during his tenure. We wish him well in his future endeavours.

A real air of positivity hung in the Boardroom last night as the delegates left full of enthusiasm at the new appointments. Let’s all get behind our teams now and encourage the players around the County to answer the call if they are lucky enough to receive it.