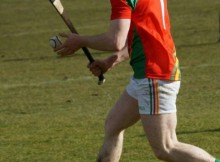 Minor Hurlers Edged Out by Westmeath

As the final whistle sounded on Saturday at Netwatch Cullen Park, Carlow minor hurlers were left to ponder on the one that got away as Westmeath had come from behind to win by two points in the Electric Ireland Leinster Minor Hurling Championship.

Westmeath started strong with points from Paddy Doody and Ciaran Doyle. Carlow responded quickly with pointed frees from Kevin McDonald and Chris Nolan as they tied the sides at 0-2 each after five minutes.  Carlow now firing on all cylinders saw Chris Nolan gave the home side the lead  for the first time and the same player extended the lead plus a mighty long range free from Kevin Mc Donald opened up a three point lead 0-5 to 0-2 after twelfth minute.  A minute later Westmeath broke through for the first of their three goals coming from full forward Niall Mitchell, and left half forward Killian Doyle from play restored the lead.

On the restart Carlow attacked from the throw in and Andrew Kane defied three backs to finish a great effort to the Westmeath net 1-11 to 1-4 inside of forty five seconds. However from here on the home side were on the back foot, and it could be said that left half forward Killian Doyle practically dragged Westmeath back in to the game with three pointed frees and his fourth in a row from play had the lead reduced to four by the ninth minute.  Corner forward Paddy Doody slipped in along the end line and steered the ball past Tomas Dowling in the Carlow goal and all of a sudden the lead was cut to a single point 1-12 to 2-8. Doody quickly followed up with the levelling point.  Carlow’s fullback Paddy Shanahan received a knock and he moved to full forward with Eoin Redmond who was also playing well in that sector moving to fullback. Westmeath brought full forward Niall Mitchell to the midfield where he won a lot of ball and kept the forwards well supplied.

However the real turning point came turning in to the last quarter when Doody was fouled in the square and the referee awarded a penalty. As a result of a successful motion to Congress this year where there would be only one in the hurling goal for a penalty, a small bit of history was in the making as it was the first penalty taken in Netwatch Cullen Park with only the goal man on the line, and Westmeath’s Ciaran Doyle duly scored the penalty to put his side three points clear 3-9 to 1-12. Carlow battled to the very end but that extra bit of scoring power let them down. After getting in front Westmeath were able to go no further but they held on for dear life as Carlow tried all they could to get the vital scores that didn’t come

Kevin McDonald was outstanding for Carlow scoring eight points and all players tried their very best.