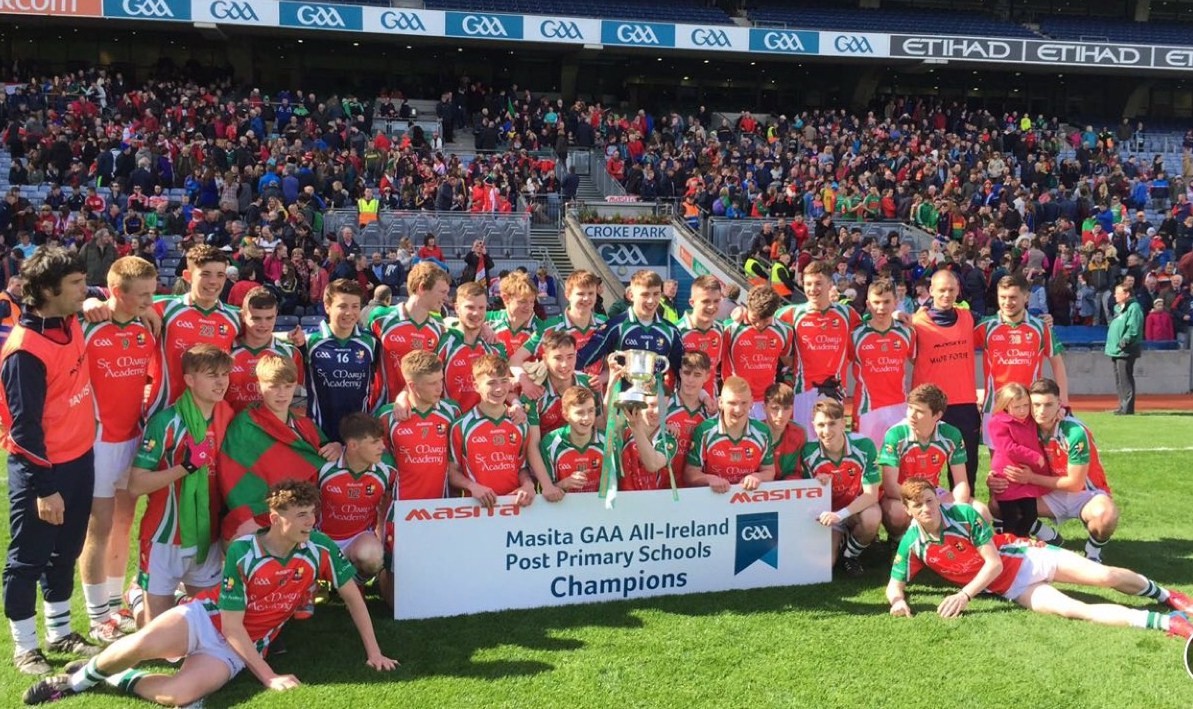 CBS Carlow Storm to All Ireland Victory at Headquarters CBS Carlow Captain Niall Lowry hoisted the Paddy Drummond Cup high in the Hogan Stand in front of the beaming supporters and teammates. CBS Carlow survived a late comeback of sorts from The Abbey which saw them score two goals two minutes apart with less than ten minutes remaining. A long range free from Niall Lowry was enough to keep CBS Carlow seven points clear and allow them close out the game.

All Ireland Finals can often pass teams by and a bad start can be enough to keep a team out of contention. Fifty seconds were on the clock when Niall Lowry sent the ball over the bar to give CBS Carlow a remarkable start. Shane O’Neill had done well to find space and deliver a diagonal ball to Lowry who carried it forward and got CBS Carlow up and running.

The discipline and determination when tackling was once again championed by Maurice Browne post match and as early as the fourth minute Dylan Salter did enough to force  The Abbey to shoot wide. The Abbey would get their chance though; Shane Neville charged towards goal and bolted a shot past Ciaran Byrne to the back  of the net to rattle the CBS Carlow men. Maurice Browne explained how his team have  “responded well to everything that has being thrown at them”. The CBS Carlow men responded in impressive fashion, The Abbey would go a staggering forty two minutes before they registered another score.

In the wake of The Abbey goal came some fine defensive efforts. Niall Lowry and Colm Hulton combined deep inside their own half to make sure The Abbey wouldn’t hold onto the ball for long. Shane O’Neill got his first point of the day on nine minutes. When The Abbey tried to respond Ross Dunphy made a textbook challenge to win the ball back inside the CBS Carlow half. Niall Lowry added to his earlier point with a fine long range free to bring the sides level.

Shane O’Neill delivered a ball from over fifty metres and two Abbey men could only watch as it drifted over their heads into the hands of Colm Hulton. Hulton made no mistake in blasting it to the back of the net to land a huge blow on The Abbey. Fresh from giving the vital ball to Hulton, O’Neill found himself inside his own half diving with arms outstretched to block the ball to prevent The Abbey from getting closer to the CBS Carlow goal.

Colm Hulton was very unlucky to see his goal chance cleared off the line, Adam Deering was there to calmly put it over the bar. Hulton scored a point shortly thereafter with the CBS Carlow attack starting in front of their own goal when Trevor Collins collected the ball that had drifted over The Abbey forwards. Adam Deering got another point on twenty one minutes to put CBS Carlow six clear. The Abbey were trying hard to get the ball in an advanced position but Brian Byrne stuck in two impressive blocks to quell any momentum they had when they attacked. When The Abbey found themselves inside the CBS Carlow twenty one they were met with a swarm of red jerseys that consisted of Kealan Galligan and Trevor Collins and they were forced to send the ball wide.

Colm Hulton added to CBS Carlow’s scores with a point late in the first half. Ciaran Larkin got a fine score after he combined with James Brennan to bring the ball up field at pace. At Half Time CBS Carlow had a commanding lead of 1-8 to 1-0.

Shane O’Neill started the second half in fine form, in the first four minutes of the half he performed three dummies , the third one was enough to get past his man and score a point. Colm Hulton and Adam Deering had done very well to keep the ball alive and get it to Shane O’Neill for the score. James Brennan got his first of the day after a fine catch by O’Neill in midfield. Brian Byrne and Kealan Galligan worked very hard together to deny The Abbey a scoring chance. Niall Lowry surged forward, passed it to Hulton who gave it to James Brennan and he got his second score and CBS Carlow were eleven points clear.

Another impressive Ross Dunphy tackle dislodged the ball, he came forward retrieved the ball and gave it to Jordan Morrissey who popped it over from over thirty five metres in remarkable fashion. Ross Dunphy got a well deserved score after combining with Adam Deering to put CBS Carlow thirteen points ahead. The Ross Dunphy point meant that every one of the CBS Carlow front eight had scored.

Shane O’Neill took a knock earlier in the half and was substituted on forty nine minutes , as he left the pitch the CBS Carlow supporters rose to their feet to cheer him off. The Abbey got their first score since the sixth minute when Josh Ryan scored a free to hand them the uphill struggle of needing four goals in the last twelve minutes. Ryan reacted quickest when his shot hit the post and made no mistake with his second attempt to get a goal for The Abbey. Two minutes later the ball bounced clear of the CBS Carlow goal only for the referee Martin McNally (Monaghan) to consult with his umpires and give a penalty. Daire Egan shot it under Ciaran Byrne’s body to add to the CBS Carlow supporters’ nerves.

The nerves were not matched on the pitch. Niall Lowry stepped up to convert a long range free that vitally edged CBS Carlow into a seven point lead that meant The Abbey would need to score three times. The Abbey added two late frees but it wouldn’t be enough. Brian Byrne caught two lofty balls in front of his own goal and disposed of the danger. Jordan Morrissey leapt high into the air to win a vital ball to ensure CBS Carlow would maintain possession. It was a fitting end to the game when Brian Byrne won yet another ball in front of his own goal and was then fouled; the full time whistle blew when the kick was taken. CBS Carlow had won on a score line of 1-14 to 3-3.

Masita Man of The Match

TG4 had the hard task of picking the man of the match today. They chose Shane O’Neill who was no doubt worthy of the prize of a framed jersey from Masita. The award could easily have gone to any of the CBS Carlow men today who once again showed how balanced they are as a team and how much talent they have.